Before you start reading this article, I'd suggest to take a look at the Route Planner application to understand what I am talking about. This post explains the process/code behind the route planner JavaScript application. You can fork/star the project in Github if you wish. 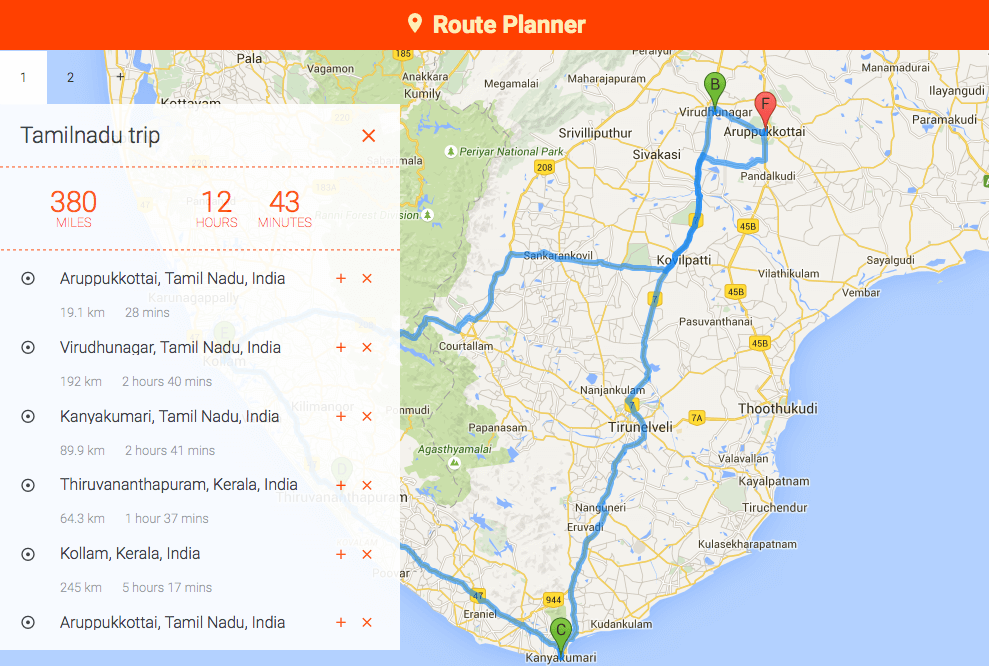 Having photography as a hobby makes me travel to places whenever I get a chance. When planning such trips, I needed a tool that assist me in analysing different routes. Google Maps is good, but it did not have the feature that I wanted. I.e. showing distance and time between individual destinations. Having a hammer called React, this problem really started looking like a nail to me.

I have been using React for a while at work. In short, I love it. For a couple of my other side projects, I was using Backbone, which was good. However, with the added knowledge of React, I was really looking for an opportunity to unleash its power :). So I decided to make a simple React application that uses the Google Maps API and helps me to plan routes for my trip.

Laying the foundation - browserify and npm

It is very important to have a good build system and module framework to organize your code. As your project grows, you'll thank yourself for laying a good foundation in the beginning of your project. I decided to use Grunt and Browserify as by build system and bundler. Moreover, there's a JSX transform called Reactify which makes it easy to use React and Browsrify together. With this, here's my package.json with all my project dependencies.

I have also added grunt-contrib-sass and grunt-contrib-connect as my dev dependencies. These two helps in compiling my .scss files to .css and serving static files during development.

This script, when running, makes sure to take all the JavaScript files referenced from src/js/index.js, transform them from JSX to pure JavaScript and then bundle all of them together into resources/js/routeplanner.js.

After you have your dependencies defined in a package.json, next step is to create your build pipeline. For my project, all I needed is three simple tasks.

Here's my Gruntfile.js that include the above said tasks.

With the bundler and build system is in place, now its time to write the real code.

Here's a code snippet of my application.

Render the React component into the DOM

With this structure, all you have to do is, create each components and define the render() method for each of them. For example, here's the <Header/> component.

When designing a React application, it is very important to consider where you hold your application state. React suggests to have your components stateless. But if you want to have states, then hold the state as high as possible in the component hierarchy and pass it along to the child components as props. This way, there will be only one source of truth and data flow will be unidirection.

For my application, I decided to hold my state in the <Application/> component which is the top level component.

I believe I showed you the basic structure of the Route Planner application. If you'd like to see more code, feel free to fork the route-planner project in Github. If you have any questions or wants to know more about any piece of code in this project, please leave a comment.